We have a daily batch process which grabs all warehouse_products across all locations. It usually takes about 2.5 hours to run, but for some reason, on December 25th, it took around 3x as long.

As a result, we’re noticing some gaps in our data. We should be able to work around this, but out of curiosity, was any maintenance being done on December 25th?

I’m afraid I don’t have the failed request_ids for cross reference, but let me know if I need to provide more information.

All the best,
Colin

Is the email you used to register here associated with that same SH account that presented the behavior you described?

If so, it would be a starting point for us to investigate.

Have a great day!
TomasFD

All the best,
Colin

Thanks for hanging in there!

Wanted to jump in and ask by failed request_ids do you mean warehouse_products queries that timed out? Or were they throttled?

Let me know if there’s anything I can do to assist.

They were throttled. I have some retry logic in place that’ll grab the error message, time.sleep(N) for the number of seconds we’re told to wait, and then retry the previous request.

You’ll see in the screenshot, after the script waits for 34 seconds, the script retried the previous request, but when the successive request is made, we’re told to wait again. We would expect that after 34 seconds, the original request would go through. 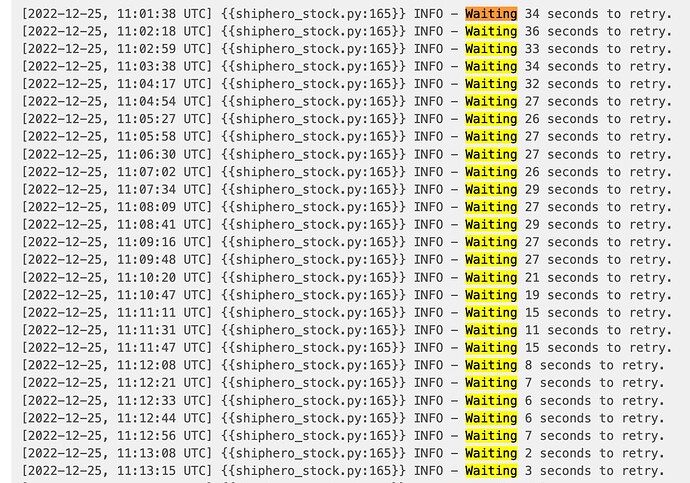 Wanted to let you know that we’re still looking into what caused the issue on the 25th for you.

I’ll update you as soon as I can.

Thanks for hanging in there!

It seems on the 25th that the Engineering email associated with your account was making shipment queries within the same second as your warehouse_products queries. The credits are shared per account which is what led to the significant delay on the 25th.

Let me know if you have any questions or concerns.

Ah good to know, @Rayanp. Thanks for investigating.